Allergies And Your Health 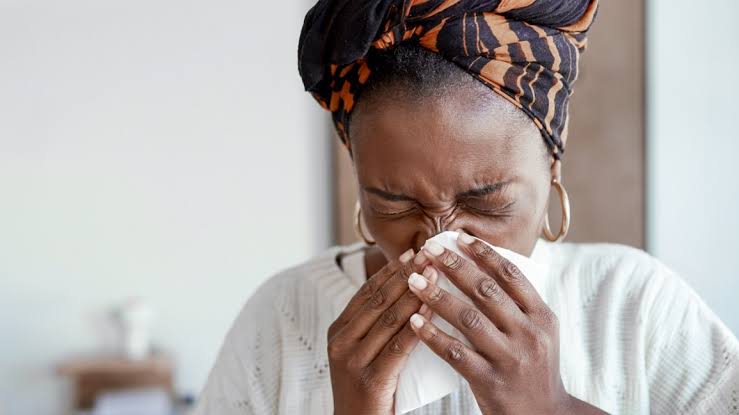 Allergy reactions are part of the most common health related issues worldwide. These reactions vary from each individual in types and how severe it can be.

Allergy is a kind of immune response. Normally, our body’s immune system helps to fight against any substance that is harmful in our body. But in the case of an allergy, you can become hypersensitive to a substance which ideally should be harmless .This causes your immune system to overreact. For example, pollen, perfume, dust mite, pet dander and certain foods can cause allergy reactions in some people. 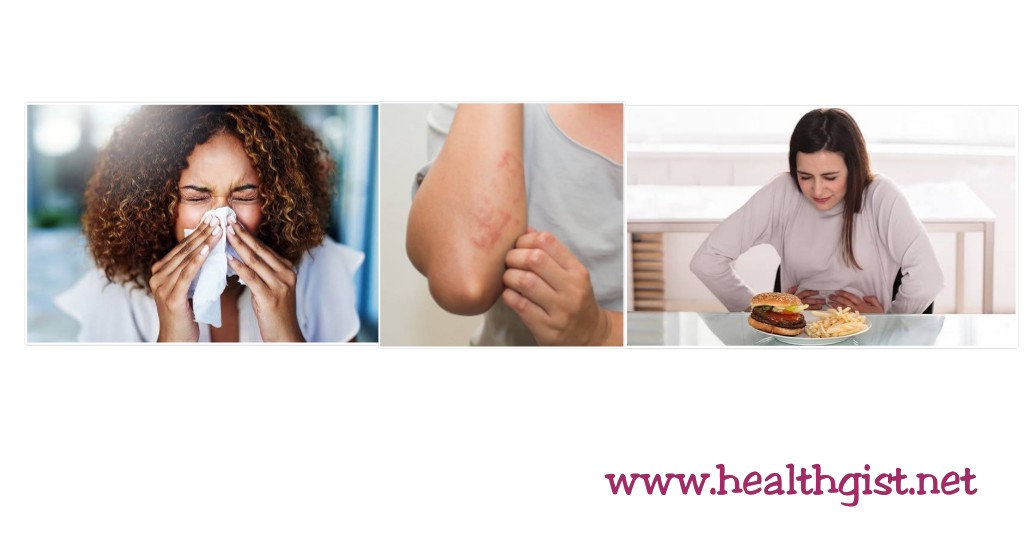 If you are allergic to a certain substance, you might wonder why you react to it and some people don’t. Well the reason is simple. Normally, when you are exposed to an infectious or harmful substance (antigen), your body produces certain substances called antibodies ( also called immunoglobulins) that can help fight against this infection. This process is called an immune response. But in the case of an allergy, the substance your body is fighting against is usually not harmful but your body’s immune system seems highly sensitive to it.

Certain factors can put you at a higher risk for developing an allergy like ; Age (children are more prone to developing allergies than adults), living in environments with high pollution and if you have a family history of allergies.

Common allergies and their symptoms 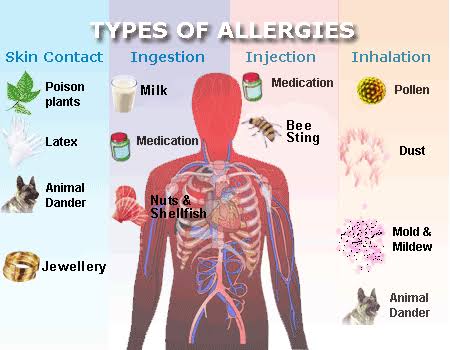 1. Allergic rhinitis also known as hay fever affects the nose and is caused by inhaling airborne particles like dust, pollen and animal dander ( allergen particles that accumulates on the skin of animals). Symptoms includes irritation of the nose, sneezing, runny nose, itchy, watery and red eyes.

2. Food allergy. For those with food allergies, the allergen is a particular constituent of the food rather than the whole food. For example, a person might be allergic to fruits that contains latex in them like banana, pineapple and mangoes or certain proteins like those in peanuts. Food allergy can cause vomiting, itching, abdominal pain and diarrhea.

3. Allergic skin reactions. The common cause is exposure to latex. Some people are allergic to latex which is used to make rubber and would develop skin reactions on exposure to materials made from it e.g. latex gloves. Symptoms are rashes, redness, peeling, itching.

4. Allergy to insect stings/bites. Asides the general swelling associated with insect stings and bites, those allergic may develop hives ( itchy, swollen red areas on the skin due to allergens), cough and shortness of breath.

5. Allergy to medications can cause rash, hives and swelling ( especially on the face)

Anaphylaxis is a severe allergy reaction which causes the trachea to narrow and the blood vessels to widen leading to shock known as anaphylactic shock. A person under this condition can die within few minutes if emergency treatment is not given. 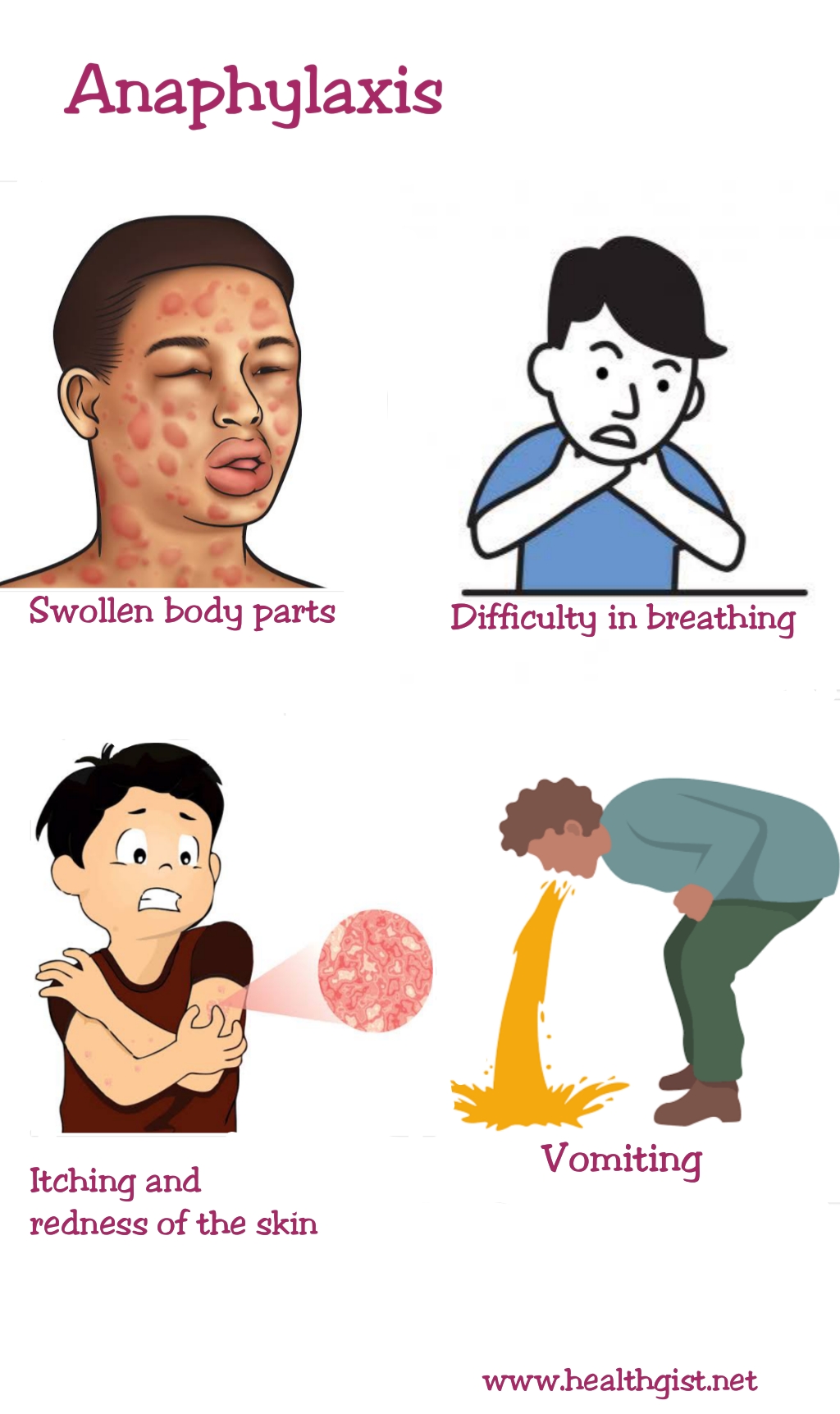 Unlike mild allergies, various symptoms develop very rapidly in anaphylaxis. They include;

1. Generally, medications such as antihistamines can help block the action of histamine which is responsible for initiating allergy reactions in the body. This way, your body does not react to the allergens.

2. Nasal sprays and decongestants can help to provide relief for allergy reactions affecting the nose.

4. In the case of insect stings, remove the stinger. Make sure you do not squeeze it out so as to prevent more venom from entering the bloodstream. You can treat symptoms such as hives with treatment mentioned in (3) above. Oral drugs containing antihistamines can also be taken. 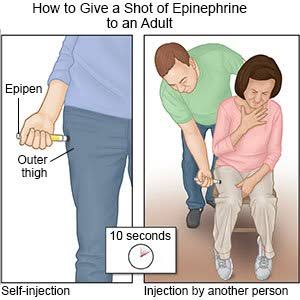 DO YOU ALWAYS HAVE BLOCKED NOSE? READ THIS!