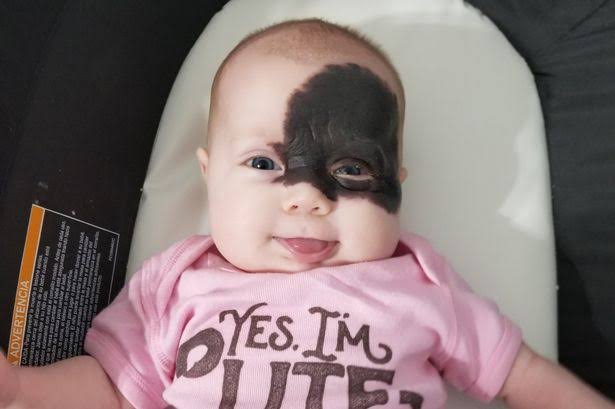 WHAT DO BIRTHMARKS MEAN?
Birthmarks are a prevalent type of discoloration that occurs at birth or within the first week of life on your skin. Usually they carry no risk of becoming cancerous. They can occur on any part of the body, they also vary in color, height, appearance, and type.

Some of them fade with time; others get larger or remain the same. Most birthmarks are harmless, although some types of birthmark suggest the presence of underlying medical conditions. Birthmarks can be removed for aesthetic purposes in certain instances. 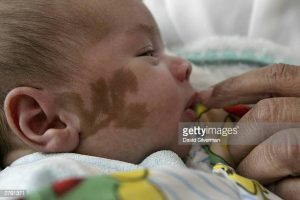 BETHLEHEM, WEST BANK – DECEMBER 7: With his unique birthmark showing, 16-day-old Palestinian infant Alaa Ayad is tended to by his grandmother Aysha Ayad in their family home December 7, 2003 in Aida refugee camp in the West Bank town of Bethlehem. Palestinians are hailing Alaa as a miracle baby saying the birthmark across his cheek roughly forms in Arabic letters the name of his uncle, Alaa, a Hamas militant killed by Israeli troops eight months earlier. Baby Alaa was born on November 21, 2003 and his uncle killed on March 25, 2003. (Photo by David Silverman/Getty Images)

ARE BIRTHMARKS GENETIC?
Some birthmarks are inherited and are run in families, but most of them are not. Some are activated only rarely by gene mutations. Some babies born with port-wine stains, for instance, have a rare disorder called klippel-Trenaunay syndrome, a genetic condition. Sturge-weber syndrome, another unusual disorder, also features port-wine stains and is activated by a different gene mutation. It also doesn’t run in households and can’t be inherited.

CAN BIRTHMARKS APPEAR LATER IN LIFE?
Birthmarks apply to skin spots which are evident at birth or shortly afterwards. Marks like moles on your skin can appear later in life, but are not considered birthmarks.

FORMS OF BIRTHMARKS
Many birthmarks fall into one or two groups, with a different reason for each of them;
When blood vessels in a specific region of your skin do not form the way they should, vascular birthmarks occur. There could be too many blood vessels clustered in one region or the blood vessels may be wider than they should be.

Pigmented birthmarks happen in regions with an overabundance of pigment cells. Pigment cells are what give the skin its natural color. Examples include Moles {congenital nevi} and café au lait spots.
Moles vary from pink to light brown or black in appearance. They differ in size and may be raised or flat. Usually, they are round in shape. Moles can appear on your face or body anywhere.

Spots for café au lait: These birthmarks are somewhat in oval in shape and literally mean coffee with milk” when translated from French. They appear as pale brown skin lesions. Generally, the darker your skin is, the darker your café au lait spot will be. From birth through early childhood, this type of Birthmark can occur at any-time. In scale, they can become larger but sometimes fade. The presence of numerous café au lait spots may be a pointer to the presence of a rare medical disorder, called neurofibromatosis.