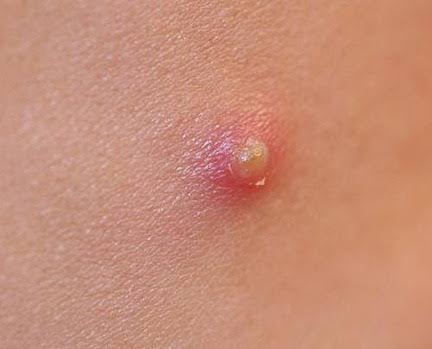 A boil is caused by accumulation of pus in the skin due to an infection. Common areas of the body affected are the face, armpits, eyelids and groin. A boil on the eyelid is called a stye.

Are boils contagious?
Boils are usually not contagious although they can harbor and spread staphylococcus infection through skin to skin contact. Bacteria such as staphylococcus can gain access through a cut in the skin and cause a boil.

Causes
Boils can be caused by ingrown hair or by the presence of foreign materials in the skin. We can get infected by bacteria through a cut on the skin. Normally, when this bacteria gets into our body, the white blood cells fights against it. The dead bacteria plus some dead white blood cells and skin tissues form pus. This is seen as a foreign material and a boil forms to push it out.

Types of boil
Based on location and/or severity, boils have special names. 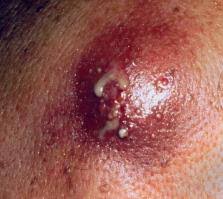 A carbuncle is a cluster of boils. It develops over a few days and is caused by the Bacteria staphylococcus. The most commonly affected regions are hairy areas, the back of the neck, armpits, thighs, groin and back. Carbuncles take a longer time to heal than a single boil (furuncle) and will require medical attention. They mostly affect older men and individuals with low immune system. You might also experience a fever if you have a carbuncle.

It is a type of boil that is formed by inflammation of the skin where hair follicles have been compressed over time. It occurs inside or above the crease of the buttocks. As this region gets inflamed, a cyst is formed and can make sitting painful. 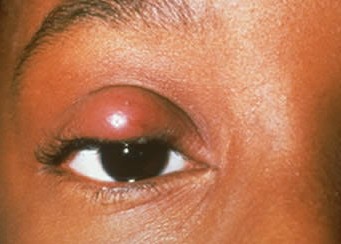 A stye is very common. It occurs at the base of the eyelash and sometimes inside the eyelids. It can be as a result of a bacterial infection of the eyelid or inflammation of hair follicles.

Treatment
Most boils when left alone will eventually burst. It is not advisable to burst them yourself as this can result in a scar. You can however make it drain faster by applying heat with a clean cloth soaked in hot water. Pain medications can help relief the pain. Natural remedies like shea butter and castor oil can also make it drain faster. Once the boil opens, cover it with a sterile dressing to prevent infection of the surrounding area.

Usually boils do not need medical attention but you might need one if your boil keeps getting bigger and does not drain within two weeks and is accompanied with a fever and severe pain. Do not try to burst it as this can lead to serious complications. Your physician will numb the area to reduce pain and then drain the boil using a sterile needle. Such boils usually contain several pockets of pus. Antibiotics will also be administered to treat the infection. Even after the boil is healed, it is advisable to complete your dosage so as to prevent recurrence of the infection.

Why do boils come back?
Usually individuals who are carriers of staphylococcus on their skin have a higher recurrence rate for boils especially when there is a graze or cut on their skin such as after shaving. If you keep having boils, it is advisable to use antiseptic soaps to kill the bacteria on your skin.