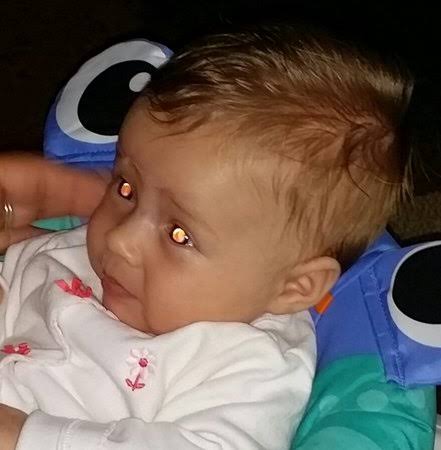 Fredrick: “I’m fine. Are you home now? The photographs are ready.”

Mrs Wong: “Ok. Could you bring them over? We are at home at the moment. I hope they are nice.”

Fredrick: “Sure, they are. Your baby looks so beautiful with her eyes as a sparkling irradiance of cat eyes.”

Mrs Wong: “Beauty runs in our family; every child is beautiful in their own way.” Fredrick: “I’ll be there in 15 minutes then.”

Mrs Wong: “My husband and I will be expecting you.”

While Mrs Wong hung up the phone, she smiled, “Cat Eyes? Quite impressive!” Her one-year old Ladie was a chubby, little, lively and cute girl. She always had this spark in her eyes. Whenever the flash of light in a camera or from any other light source shone, it would be totally white.

This got Mr Fredrick, the photographer thinking while driving to Wong’s home. He had taken a number of pictures for families in the course of his job but something in him began to feel like something was not right about Ladie’s eyes. Nonetheless, he couldn’t figure out what it was. After a while, he screamed “Yes, I remember!”. He had taken pictures for another family, the Harpers 5 years ago. Their toddler also had this white glow in the eyes that Ladie also had. But somehow, that family got the information that it was not normal. They sought care for the baby and realized he had RE-TI-NO-BLAS-TO-MA.

Retinoblastoma is a cancerous tumour of the light-sensitive cover of the inner aspect of the eyes(retina). There could be several instances of it’s occurrence. It can run in families or occur spontaneously. The debilitating effects could be on just an eye or both eyes . This so-called Retinoblastoma is commonly found in children below the age of 5.

In our bodies, the basic unit of life is the cell. Now, these cells undergo a cycle of growth and death. When these cells are old, new or fresh cells replace them. That is why portions of our skin at times become scaly and peel off occasionally. One of the regulators that ensure this cell death is called the RB gene. It ensures that cell cycle functions are regulated and well-directed. However, a damage(mutation) to this regulator will cause it to malfunction. So, old cells do not die as new cells are continuously formed. This thereby causes an accumulation of cells. This is what occurs in people with retinoblastomas.

Leukocoria/ White glow in the eyes: This is the most common feature of Retinoblastoma. It is an abnormal whitish reflection from the retina. Usually in humans, when light is shone into the eye, there is a reflection of light from the network of blood vessels in the retina. This is known as the red reflex. In children with retinoblastoma (RB), this appears as pink or even white.

Stray-eye/ Strabismus: This occurs in 2 out of 10 children with RB. There is a misalignment in the direction of gaze whenever the child attempts to focus. There could also be an appearance of a squint in the eyes.

Pain, Redness of the affected eye, if it has persisted for a long time.

Outward protrusion or bulging of the affected eyes (proptosis).

Cloudy appearance of the central portion of the eyes (iris and pupils).

Discolouration of the central part of the eyes

Far-reaching/systemic symptoms showing involvement of other body parts such as bone pain when the cancer cells spread to the skeletal structures.

Chemotherapy, Radiotherapy, and Surgery are the options for treatment. The exact modality will be decided by the child’s physician.

Post Views: 123
Tags:Cancereye
previousThings you should know about GONORRHEA.
next“HELP! A THIEF IN THE NIGHT” BY NURSE BRENDA
Home
Blog Home
Browse Categories
Talk to a Doctor