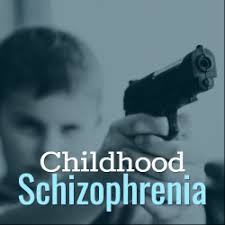 Schizophrenia is a chronic mental illness with an average age of onset from the early 20s to the late 40s however it can also be diagnosed in childhood. A diagnosis of Childhood Onset Schizophrenia (COS) is typically given when the first appearance of symptoms occurs before the age of 13. It can also be observed in children younger than age 6 although this is very rare.

COS is quite difficult to diagnose and a lot of clinicians may be reluctant to make the diagnosis in children. This is partly because the presentation can be different and although diagnosis is made using the same criteria that is used for diagnosing adult-onset schizophrenia it is difficult to assess reduced level of functioning in children.

Indicators such as hallucination, delusion which form part of the hallmark of diagnosing schizophrenia in adults can be grossly misleading in children. A child with an imaginary friend (which is not uncommon) can be mistaken for psychosis, underdeveloped language skills could also be erroneously tagged as disorganized speech pattern seen in schizophrenia.

Biological and environmental factors play important roles in the aetiology of schizophrenia, whether childhood onset or adult onset. For a set of twins, if both parents have schizophrenia then there is an around 46% chance that the same trait will be found in them if they are monozygotic and 10% chance if they are dizygotic.

As high as 80% of the risk of developing schizophrenia is heritable; it is therefore safe to say that COS as a variant of Adult Onset Schizophrenia has increased familial clustering with a higher incidence of schizophrenia spectrum disorders and other rare variants.

Age and developmental stage also influence the symptoms, course, and outcome of the disorder. So, when parents see what they believe to be signs of schizophrenia in their child, consulting a paediatrician is a good place to start and subsequently child schizophrenia assessment can be done. This would most likely allay their fears because of how rare the disorder is in children.