Is your kid just hyperactive or is it ADHD? 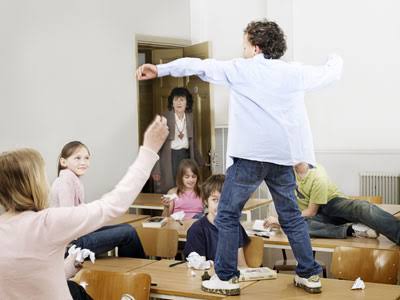 It is quite normal for most healthy kids to sometimes be restless and hyperactive. However, when this behaviour becomes excessive coupled with several other factors such as inability to pay attention, impulsiveness and lots more, it calls for attention.

You might be worried about that kid who no matter how much you discipline does what he wants, talks at inappropriate times, interrupt others, acts impulsively and impatiently, asks irrelevant questions, has trouble staying focused, loses things easily, does not pay attention when spoken to, unnecessarily shows fidget and restlessness, makes careless mistakes in school-works with difficulty finishing them. Sometimes, the child is just being a trouble maker.

That child could only be naturally hyperactive with the need of a great deal of patience and good parenting. It could also be possible that the child has Attention Deficit/Hyperactive Disorder (ADHD). There should not be a cause for alarm as long as the symptoms are properly managed. This article will shed more light on what ADHD is and how to care for a child with it.

Attention deficit/hyperactive disorder (ADHD) is a neurodevelopmental disorder that causes developmental impairment of the brain’s self management system, majorly characterized by inattention, hyperactivity and impulsiveness. It affects more males than females and the symptoms can continue to adulthood.
There are 3 types of ADHD;

Though genetics may play a role, the exact cause for this neurological disorder is still unknown. Also, exposure of a pregnant woman to certain chemicals, drug abuse and toxins could increase the risk of a child having ADHD. Alas! These substances can affect the fetus’ brain.

Initially, it might be difficult to tell if a child has ADHD as most symptoms are the typical behaviour of young children. Once a child reaches the ages of 5-7, they are expected to pay more attention when being talked to. They should be able to hold themselves from blurting out comments impulsively and sit still when told to do so.

It is also important to note that people with ADHD do not act out these symptoms on purpose. It is rather acted as a result of the inability of their brains to control their behavioural pattern. The symptoms vary depending on the type of ADHD. Acccording to the Diagnostic and Statistical manual of Mental disorders, there are nine specific symptoms for both primarily inattentive ADHD and primarily hyperactive/impulsive ADHD. A child must have at least 6 of these symptoms over a period of at least 6 months and also exhibit them in more than two locations or settings such as the home, school, social gathering etc.
The symptoms of primarily inattentive ADHD are:

As the cause of ADHD is unknown, there is also no known cure. However, certain treatments can help manage the symptoms and improve the behavioural pattern of the child. Before concluding that a child has ADHD, it is important to see a psychiatrist because a child can be impulsive, hyperactive and unable to pay attention and still not have ADHD. There are a lot of conditions that can have the same symptoms as ADHD e.g psychological disorder such as anxiety, depression, etc. Other differing conditions include: sleep disorders, coping with traumatic event like bullying and relocation or separation from a loved one. Treatments include;

Also it is advisable to enroll the child in schools that take such individuals into consideration. Because this can help a lot as more routine to improve behavioural patterns would be put in place.