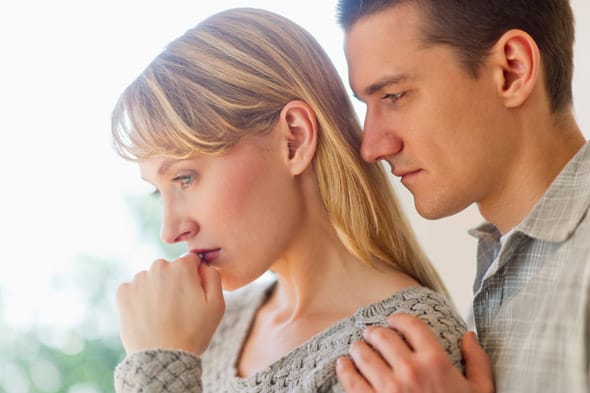 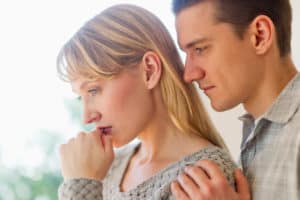 Having miscarriage is such a sad event for couples. Surprisingly, majority of the causes are preventable.

Recurrent miscarriage is when there is spontaneous (not voluntary) consecutive two or more termination of pregnancy before the age of viability (24 weeks in UK and 28 weeks in Nigeria). Most spontaneous loss of pregnancy happens within the first trimester (13 weeks).

Recurrent miscarriage is not a single disease entity but is a syndrome that may have one or more causes. Examples of causes include abnormally shaped uterus, uterine fibroid, previous scar on the uterus preventing implantation, hormonal imbalances e.g. prolactin, thyroid hormone, progesterone; cervical incompetence.

Cervical incompetence is the inability of the cervix to be able to carry pregnancy to term due to functional or structural abnormalities. It is the commonest cause of second trimester abortion (33%). 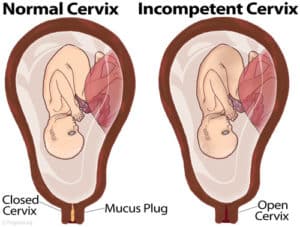 It is probable that cervical length and strength, together with the quality of the cervical mucus, contribute towards cervical function, both to retain the pregnancy within the uterus and to exclude potential bacterial pathogens from ascending from the vagina. Numerous studies have demonstrated a strong relationship between cervical length and the risk of recurrent miscarriage. The cervix may be damaged (or completely removed) by surgery in the treatment of cervical cancer or, rarely, during a difficult instrumental vaginal delivery, or caesarean section at full dilatation.

The following risk factors can make you have cervical incompetence hence recurrent miscarriage: 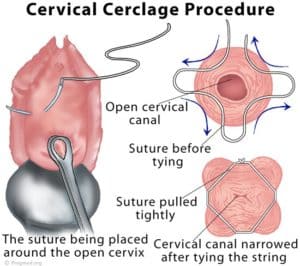 It is of value for the patient to have a stat dose of prophylactic antibiotics prior to surgery.

Either a light general anaesthetic or a spinal is ideal for carrying out this procedure.

Exposing and grasping of the cervix

Insertion of the suture

The McDonald suture is essentially a purse‐string suture. The suture is placed circumferentially around the upper body of the vaginal part of the cervix in four separate ‘bites’, starting either posteriorly or anteriorly based on the surgeon’s preference. To aid removal of the suture, it is advised to leave the threads about 4–5 cm long and create a knot before cutting the suture. This allows the thread to be hooked with a finger or instrument and the knot at the cervix cut. Placing the knot anteriorly makes it easier to remove in late pregnancy. Practice will determine the correct tension, which should be tight enough to just close the os but not so tight as to produce a pallor of the cervix.

Removal of the suture

Anaesthesia is not required. Removal must be performed before labour becomes established and is easily accomplished by exposing the cervix, grasping the long end of the suture as described above and cutting the suture at any of the points where it is visible on the exterior of the cervix and then by simply pulling the knot. The patient must be informed of the importance of early attendance at the hospital if there is a suggestion of labour beginning. Management is particularly difficult when the patient goes into premature labour and the decision to cut the suture or to leave it and possibly conserve the pregnancy has to be made. Potential complications include premature rupture of the membranes, chorioamnionitis, cervical rupture if the suture is not removed before the onset of labour and bleeding.

Post Views: 138
previousWHEN DRUG DOES NOT WORK FOR ME
nextEFFECTS OF IODINE DEFICIENCY ON PREGNANCY
Home
Blog Home
Browse Categories
Talk to a Doctor