HOW HEALTHY IS ALCOHOL FOR YOU? 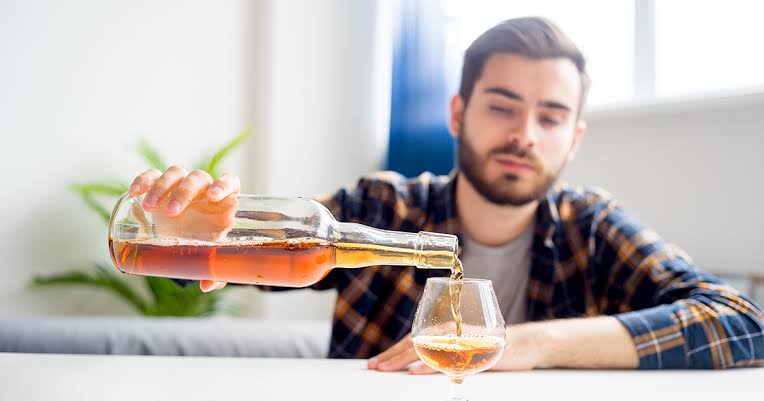 Alcohol is typically not associated with any significant effects when taken in small quantities but is of great medical importance because of its pathological and psychological effects when it is abused. Alcohol is the most important drug of dependence, the incidence of alcoholism is about 5% among the adult population in Europe and America.
Alcohol is absorbed from the buccal, oesophageal, gastric and intestinal mucosa approximately 80% is absorbed in the small intestine.

It delays gastric emptying (movement of food from to stomach to the intestine), delays fat and carbohydrate absorption and in high doses delays its own absorption. After oral administration, alcohol can usually be detected in the blood within five minutes; peak blood concentrations are typically reached between 30 minutes and two hours.

EFFECTS OF ALCOHOL
Nervous system: Alcohol decreases concentration and judgment, it also removes inhibition and increases self-confidence. In patients with an organic brain damage, it may induce unusual aggression, this is called pathological intoxication. Intoxication may lead to death from respiratory depression.

Circulatory system: Heavy consumption of alcohol can cause variable hypertension which can worsen or be mistaken for essential hypertension.

Gastrointestinal system: Heavy alcohol consumption can cause gastritis, peptic ulceration, and tears in the oesophagus which can lead to vomiting blood. Liver problem that can arise from chronic alcohol consumption includes fatty infiltration, alcoholic hepatitis and cirrhosis. Alcohol can also cause pancreatitis (acute, sub-acute and chronic).

Metabolic effects: Alcohol suppresses ADH (Anti-Diuretic Hormone, chemical in your body that determines how much of urine you make) secretion leading to polyuria (excessive urination) following its ingestion. It reduces gluconeogenesis (glucose production) leading to hypoglycemia which may cause convulsions. Alcohol can cause metabolic acidosis due to ketone bodies accumulation; also it can cause hyperuricemia which can lead to gout attacks.

Hematological effects: Bone marrow suppression can occur; it can lead to folate deficiency with macrocytosis and iron deficiency from chronic GI blood loss. Mild thrombocytopenia (low platelets) is common and can worsen the bleeding which can occur. Neutrophils do not function well in alcoholics and this predisposes them to bacterial infections (e.g. pneumococcal pneumonia).

In pregnancy: Infants of alcoholic mothers may have intra-uterine growth retardation and reduced IQ. Sometimes they have motor deficits and failure to thrive. There are certain characteristic facial features that these infants may show which include a small head, a small mouth, a flat face, flattened philtrum and a short upturned nose. 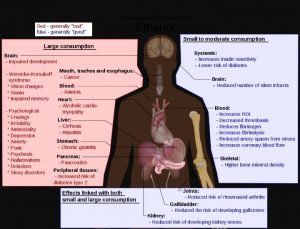 Medical uses of alcohol
Alcohol is used topically as an antiseptic. Systemic alcohol is used in poisoning by methanol or ethylene glycol, since it competes with these for oxidation by alcohol dehydrogenase, slowing the production of toxic metabolites (e.g. formaldehyde, oxalic acid).

Post Views: 109
Tags:alcohol
previousWHAT IS FAMILY PLANNING ALL ABOUT?
nextRANDOM FACTS YOU SHOULD KNOW ABOUT YOUR HEALTH
Home
Blog Home
Browse Categories
Talk to a Doctor